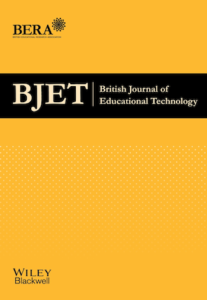 This study adds a new perspective to the observations about connectivist interaction behavior in cMOOCs by extending the notion of network building from the perspective of individuals. We explore the possibility of building a learning network named Personal Social Knowledge Network (PSKN) to support in the monitoring of learning performance and interaction in cMOOCs. The sample in this study included 284 preservice teachers and their learning lasted approximately 12 weeks. Data were primarily gathered by PSKN graphs. The results revealed a correlation between connectivist interaction measured by the PSKN (including density structure) and learning performance. The results also revealed differences in connectivist interaction behavior and patterns, indicated by PSKN (densities and structures), for high‐ and low‐performing learners in cMOOCs. The high‐performing learners show deeper knowledge interaction and social communication in addition to simple knowledge sharing and social communication. Additionally, as time passed and the PSKN of high‐performing learners extended further, their interaction behavior became more complex and their role had gradually changed from “learning” to “teaching” as well as from knowledge acceptance to knowledge creation in cMOOCs.